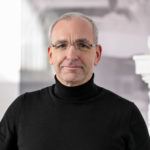 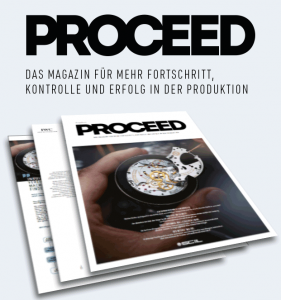 Implementation of a QM software system

Schaffhausen, Switzerland -  What steps are actually required to turn countless components into a watch whose technology, material composition, design and workmanship radiate true perfection and fascinate people all over the world?
As one of the worlds leading luxury watch brands, IWC manufactures wristwatches that unite artful engineering and precision with an exclusive design. The company currently employs around 750 people at its two production sites in Schaffhausen and Merishausertal, where Swiss luxury watches are assembled to the highest quality standards by trained experts. In total, 1274 employees work for the company worldwide.

“
"INNOVATION AND PERFECTION ARE NOT UNITED
BY THOSE WHO DO NOT MAKE MISTAKES,  BUT BY THOSE WHO FIND ALL THE ERRORS AND ELIMINATE THEM.
Ulrich Albicker, Department Manager Quality Improvement
IWC Schaffhausen

All the cogs at the IWC production facility have been seamlessly intermeshed since 1868. Every watch is individually assembled by one of the watchmakers. With a trained eye, dexterity and precision instruments, they put together several hundred individual parts to create a wristwatch. The fascination with the Schaffhausen brand is attributable, among other things, to the fact that every single process step for producing the movement features and sophisticated functions, such as the minute repeater, the tourbillon and the perpetual calendar, is performed by hand with greater precision than any machine could ever achieve. 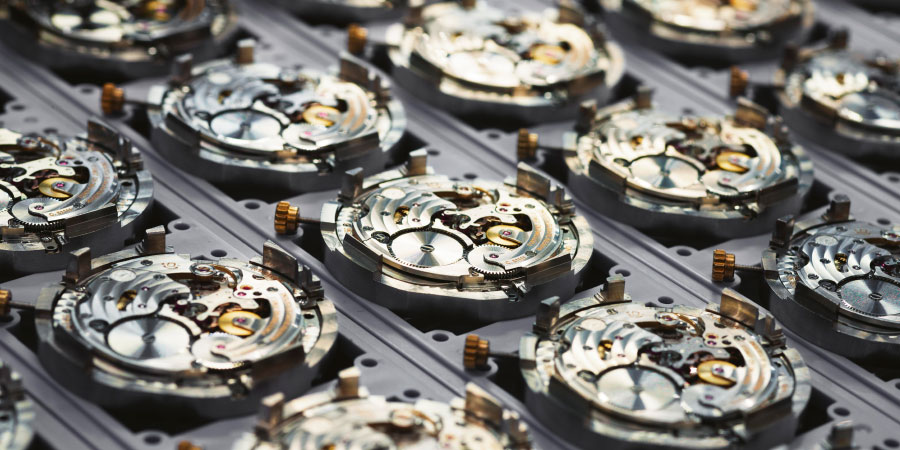 Perfection is the aspiration to which IWC strives – and not only the watchmakers work towards this goal with the utmost concentration and accuracy, but also the EOL inspectors, who find and eliminate even the smallest of flaws in a comprehensive quality assurance process. Despite all the care that is taken, occasionally one of the luxury watches has to be reworked to meet the customers‘ demands without any compromises whatsoever.

From paper-based processes to digitisation

The new digital process with its intuitive operability has greatly shortened training times for the employees. The data quality has also been improved, both with regard to data errors for faster cleansing, as well as for reworking, conclusions and improvements. Errors are found more easily and fixed more quickly, and the processing times have been substantially improved. The bottom line is an enormous gain in efficiency for IWC – and another huge step towards absolute perfection. 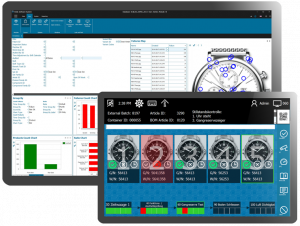 To make the process chain even more efficient, IWC sought a software that combines CAQ (Computer Aided Quality) and an MES (Manufacturing Execution System). The solution was to be used in all the manufacturing steps from the production and final assembly, through to the EOL inspection. During the design phase and a project workshop with SCIIL, all the tools and processes were therefore examined from the ground up. Only after this had happened could the actual solution take shape. Suggestions for optimizations from the employees were also recorded and taken into consideration. Developed in just 6 months, since its introduction the system has been running stably in the areas final assembly (marriage of the movement and the case), final inspection (function and aspect test), reworking (repairs), as well as for the process control and data analysis.

Advantages and benefits: alleviation and shorter processing times. The new digital process with its intuitive operability has greatly shortened training times for the employees. The data quality has also been improved, both with regard to data errors for faster cleansing, as well as for reworking, conclusions and improvements. Errors are found more easily and fixed more quickly, and the processing times have been substantially improved. The bottom line is an enormous gain in efficiency for IWC – and another huge step towards absolute perfection.

How to hear that the watch is ticking

An essential measuring procedure during the test process at IWC can also be crudely described as a „sound check“. Highly sensitive measuring equipment records the sound waves of the tick-tock of the watch. The correct accuracy rate of the seconds increment is exactly determined from the tone length and the interval, and then compared against the setpoint from the official chronometer standard on the software side. The measurement results flow directly into the Q-TRACE system. Even interference factors that have a barely perceptible impact, such as negative gravitational influences, are deducted. After all, perfection knows no tolerances! 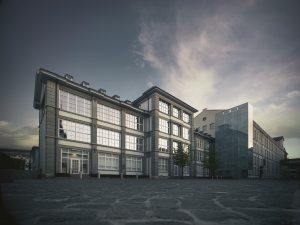 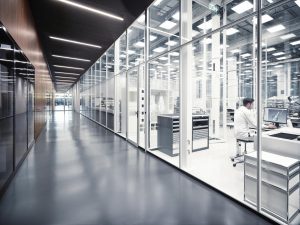 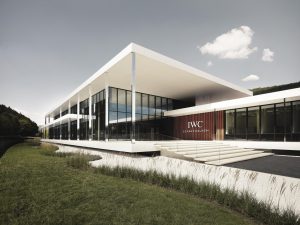 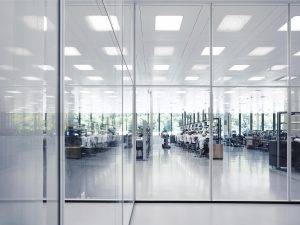 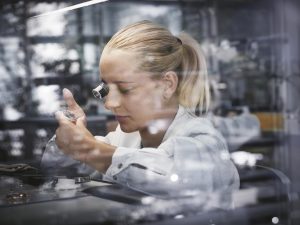 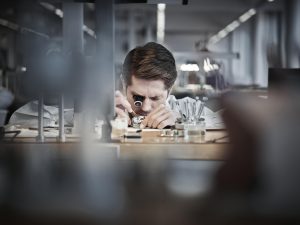 MARRIED OUT OF LOVE FOR PERFECTION 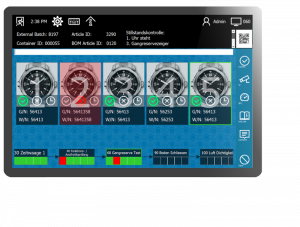 The first step in the end-of-line control for IWC watches is called „marrying“. Here, five watches are physically packed in a box, and from this point on they pass „inseparably“ through the entire process of the final inspection. During this step, the serial numbers of all the watches are automatically registered and linked to the individual box number. The master data (casing and factory serial numbers, inspection batch/order, employees in the final assembly and the inspectors) is also recorded and accompanies the process on the software side. Why five watches? This bundling has proved to be the most practicable group size for analysing and simulating the entire test process, and makes a significant contribution to reducing the processing speed.

All paths lead to perfection!

The flawless quality of IWC watches is safeguarded at 13 checkpoints in the end-of-line process. Ulrich Albicker from IWC explains the idea behind the extremely complex quality inspection chain.
Mr. Albicker, why did IWC come up with the idea of a digital CAQ/MES system?
At long last, we wanted ONE solution for ALL the production steps. The Excel lists, help sheets and island solutions that had been used previously should be replaced. This would enable the planning, recording and steering of the quality inspections, errors and reworking, and also safeguard traceability back to the supplier. Other issues concerned data collection, and the automatic extraction of reports and key figures  from the system.
What was important to you in choosing the right partner?
We evaluated all the potential candidates on the basis of the consulting, development and service expenditures, licensing costs, recurring costs, implementation time, and the suitability of the vendor/ contact partner and technology. SCIIL AG was our first choice, in particular on account of the functional and support diversity, and the short implementation time.

How do you rate the result? What successes was IWC able to achieve?
Expressed in hard numbers: The optimised processes in the final inspection bring an efficiency gain of about 15 percent – and we also expect improvements in the other areas. Additionally, the automatic generation of reports and dashboards from the system data saves around two working days per month. This creates an appetite for more. We are already planning to expand the project in various directions, and we want to make the benefits that we have achieved even more wide-ranging and usable throughout the company.

YOU WANT TO KNOW MORE ABOUT SCIIL AND OUR PRODUCTS?

This website uses cookies to improve your experience while you navigate through the website. Out of these cookies, the cookies that are categorized as necessary are stored on your browser as they are essential for the working of basic functionalities of the website. We also use third-party cookies that help us analyze and understand how you use this website. These cookies will be stored in your browser only with your consent. You also have the option to opt-out of these cookies. But opting out of some of these cookies may have an effect on your browsing experience.
Necessary Always Enabled
Necessary cookies are absolutely essential for the website to function properly. This category only includes cookies that ensures basic functionalities and security features of the website. These cookies do not store any personal information.
Non-necessary
Any cookies that may not be particularly necessary for the website to function and is used specifically to collect user personal data via analytics, ads, other embedded contents are termed as non-necessary cookies. It is mandatory to procure user consent prior to running these cookies on your website.
SAVE & ACCEPT